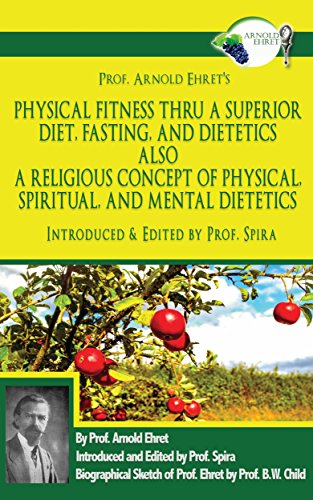 Is it Possible for Humans to Achieve Paradise on Earth?

Physical Fitness Thru a Superior Diet, Fasting, and Dietetics Also a Religious Concept of Physical, Spiritual, and Mental Dietetics include articles by Prof. Arnold Ehret, originator of the Mucusless Diet Healing System, which philosophically explore humanity’s potential to manifest paradise on Earth through mucus-free living, rational fasting, and physical fitness.

Additional articles in this Mucus-free Life edition include an in-depth and revealing biographical sketch of Ehret by B.W. Child, and Ehret’s lessons on exercise and bathing.

Out of Print, UNTIL NOW!

Some articles within the Physical Fitness book had been out of print for years until Ehret scholar and Mucusless Diet expert Prof. Spira published this version.

Ehret’s message of hope for humanity is needed today more than ever. Humans are destroying themselves and the Earth on an unprecedented level. Ehret shares his solution for the problems of humanity through his message of superior natural healing. He believes that the source of all problems in the world is an improper and unnatural diet. Thus, the dysfunction of governments, police brutality, war, the mistreatment of the environment, racism, sexism, all forms of bigotry, the disregard for the lives of animals, etc., are all symptoms of a pus- and mucus-laden diet that renders humanity unempathetic and impotent.

In this book you will learn:

How badly do we want to experience paradise?

Are we content to live in ignorance and blame everything but diet? Is it easier to continue to believe the propaganda we have been fed? That we need to stuff ourselves with protein and fat? That we must eat certain nutritious foods, although we know that they cause illness? Ehret challenges us to shift our paradigm away from the mucus-based status quo and medical extremism of the 21st century and embrace our true nature as mucus-free beings.

Scroll up and grab a copy today.