The Hunger Diaries, or: How to Lose Weight Fasting and Eating Well 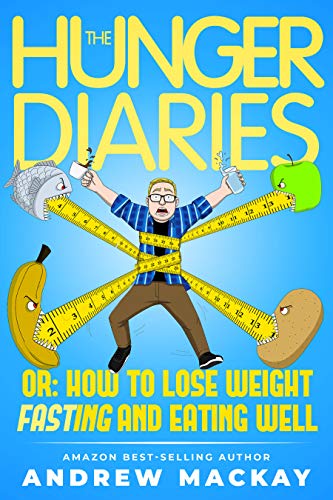 Yes, he did! Now, best-selling author Andrew Mackay reveals how he pulled it off…

Until recently, Mackay existed on fast food, processed meals, and soda. On one sizzling hot Saturday afternoon, he checked his Body Mass Index to see just how overweight he was.

Something inside this math-hating, science-shunning, exercise-averse author snapped – and it wasn’t his stomach sleeve (because he didn’t need one – yet).

Devastated by the news, Mackay cooked up a dangerously low-calorie plan to start the following Monday. He wrote a diary for the first two weeks to motivate himself and capture how it changed him mentally and physically.

As the first week ended, he realized he’d done everything wrong. Then, he discovered the real key to weight loss – intermittent and prolonged fasting. You’ll be amazed at just some of the benefits unearthed in this book, which include:

No one said it was going to be easy.

But… no one said it couldn’t be a thrilling, hilarious, and insightful document of one man’s weight loss triumph – or: a non-fiction Bridget Jones’s Diary meets all those Lose Weight Real Quick books you dumped in the trash because they didn’t work. Scroll back up and get your copy now. This book could change your life forever.

Read it for FREE on Kindle Unlimited.