The Leangains Method: The Art of Getting Ripped. Researched, Practiced, Perfected. 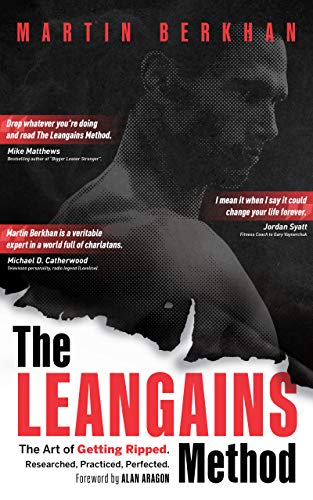 Never do cardio. Forget sit-ups. Eat when you want but don’t snack. Breakfast? Who needs it. Spend less than two hours a week in the gym to double your results in half the time, because less is more.

Sound like a reasonable diet and exercise advice? To most people, it doesn’t. But as crazy as it sounds, these statements are part of the winning formula behind Martin Berkhan’s controversial Leangains method—as evidenced by hundreds of clients and thousands of success stories from Leangains devotees all over the world.

The Leangains Method: The Art of Getting Ripped. Researched, Practiced, Perfected is the definitive fat loss manual and body transformation plan for people who are tired of gimmicks, BS, and the same old spiels they’ve heard countless times before. Tired tropes like “Eat Breakfast Like a King, Lunch Like a Prince, and Dinner Like a Pauper,” conventional “wisdom” about our eating habits and other nonsensical beliefs has no place in this book – but they are dealt with accordingly, which is to say that The Leangains Method is the perfect gift for the dabbler who can’t tell right from wrong and is highly educational for beginners or scholars alike.

Conceived and outlined on www.leangains.com over a decade ago, the Leangains diet is commonly known as the “16:8″ diet in mainstream media. The popular diet that shook the foundation of the fitness industry, kickstarted the intermittent fasting craze and caused a nutritional paradigm shift has been plagiarized more than any other diet in recent history. But its secrets have eluded everyone, and its efficiency has never been reproduced. Until now. And when its elusive creator pulls the curtain apart and reveals the treasured terroir of the Method, you will bask at its flavors and laugh at its imitators. Rest assured.

People are often told that there are no secrets left. That statement was wrong a decade ago when Martin Berkhan introduced intermittent fasting and made breakfast skipping a thing. And in The Leangains Method: The Art of Getting Ripped. Researched, Practiced, Perfected he does it again. But he doesn’t make these outlandish claims casually, and skeptics will be delighted to know that the book and its methods are fully referenced, evidence-based, and peer-reviewed by fitness industry watchdog Alan Aragon.

The Leangains Method: The Art of Getting Ripped. Researched, Practiced, Perfected is chock-full of insider secrets and cutting-edge science revealed for the very first time. You’ll learn why a calorie isn’t a calorie, and how to use this knowledge to your advantage. You’ll be taught the ingredients of the most efficient legal fat-burning stack in existence—and, should you decide to use it, be able to accelerate fat loss by up to half a pound per week. After that and much more, you’ll witness the unveiling of the greatest diet secret of them all. The magic bullet, the one thing that makes all the difference. Don’t listen to what they say. It exists.

The Leangains Method: The Art of Getting Ripped. Researched, Practiced, Perfected is the alpha and omega of fat loss, conceived at the crossroads of lived experience and brutal honesty, the everyday practicalities of dieting, and the bleeding edge of science. It’s a body transformation plan that reaches beyond bodies and into minds, perceptions, and priorities.

Its author makes a single promise. You’ve never read a book like this before, and you’ll never read its like again.

Author’s note: The Leangains Method extols the benefits of a high-protein diet, and the nutritional recommendations in the book reflect this. It’s therefore unsuitable for vegans and—to a lesser extent—vegetarians. A basic grasp of nutrition is also advised before purchasing this book; you should know how to count calories and understand the difference between fat, protein, and carbohydrate.