How To Lose Weight Without Diet & Without Exercise: 8 Steps To Lose Up To 20 Pounds In 30 Days 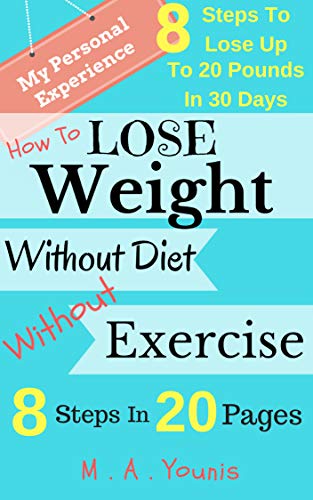 After I had finished my study, I Stayed at home useless. and after a short time, I was surprised that I began to gain weight. I didn’t pay attention to this little increase that was hardly noticed and of course I was sure that I can lose this weight easily and at any time. Suddenly my lifestyle changed and I began to stay up till sunrise or after that and began to get up at midday or sunset and if I slept at night, I sleep at a very late hour.

After a time, I discovered that my weight became 242 bounds so I took a strict decision in order not to let matters become worse. I decided to have fewer meals. Thinking, like many people, that having few meals decreases weight or limits it. So, I only had breakfast and dinner and neglected lunch, satisfied and enthusiastic. I also replaced soda with diet soda. After a short time, I found out that my weight became 276 bounds. After that I became disappointed and lost my trust in myself. So, my friends advised me to go to the gym.

It was easy to say that I would go to the gym but to do that was slightly different from what I had imagined. On entering the gym, I was shocked at the sight of the people there. I saw graceful fit bodies referring clearly to the oddness of my body. I looked around so that I may see someone else who suffers from obesity which may relieve my feeling but I found no one. I told myself that some people might have come here like me but they stopped like me. I never repeated it and I didn’t bear people’s looks. But I imagined them amazed at my weight and thanking god for what they have.

My obesity made me feel odd everywhere I go as I felt stranger at the gym, I felt strange at the clothes shop when the seller advised me, after I failed to find any suitable clothes, to try some special sizes which are called so as they are designed for the big men and overweighed and I felt that he was saying, “sir, you are very fat and you should go to another place, in the section of special clothes.

I also felt strange when I went to take the train and didn’t get a first-class ticket, so I had to book a ticket in the economic class which gave me a very bad experience when I tried to have my seat which was much smaller than my size as if the person who designed the train doesn’t regard people who are the same as my size. Or as if the society says to people of my own size, “you are freak”.

Then, I discovered 8 easy steps which were the reason for losing these extra fats in a very short period. By just slight change in my lifestyle. And I didn’t know what is the meaning of changing lifestyle unless my life became worse in the first time then I came back again to change my habits for the best.

So how were these simple habits which I followed resulted in losing all these fats in a very short period?
And what makes following these habits a reason for losing these accumulated fats?

In this book and only in 20 pages, I will mention briefly in a scientific way what really made these simple habits with little explanation for each point to tell the importance of them. I won’t lengthen in explanation just to get the information in a few pages and not to be a burden on you.

Tags: diet and fitness, healthy eating, low carb diets, nutrition tips, weight loss
« The Restaurant Diet: How to Eat Out Every Night and Still Lose Weight
Thyroid Diet Plan: How to Lose Weight, Increase Energy, and Manage Thyroid Symptoms »
You can leave a response, or trackback from your own site.
Free Diet eBook 2